For this project Clow Darling helped restore the beautiful, turn of the century character home on the corner of Catherine Street and Ridgeway Avenue in Thunder Bay.

When you ask Rob Frenette, President, TBT Engineering, what company he selects for his residential and commercial projects his first response is Clow Darling. Clow Darling has been Rob’s contractor of choice for all his commercial and residential projects over the past five years. The project though, that resonates with Rob, is Clow Darling’s involvement in the restoration of Rob’s own personal home – a project that extended over a three year period.

Rob wanted to restore the beautiful, turn of the century character home on the corner of Catherine Street and Ridgeway Avenue back to it’s original beauty. Years as a rental property – a four-plex, had significantly altered the space and restoring it to it’s original state was a daunting task. Rob called the only company he felt would be able to assist in not only maintaining the original configurations but enhancing the beauty and character of 8000 square feet of living space.

Difficult enough to renovate an empty residence, Clow Darling had to work around Rob’s family (pet’s included) that were living at the home during the entire renovation. Clow Darling’s professional staff welcomed the challenge and worked cohesively during the renovations from floor to floor.

The project was extensive and involved the removal of all radiators, (where they were brought to Superior Auto Body and spray painted) and then re-installed by Clow Darling utilizing a modern heating system including zones for all heating as well as pumps for the new system. All heating, service and water lines throughout the entire home were replaced. The old boiler was removed by Clow Darling and a new boiler installed. All new sewer distribution lines were installed. All sinks, toilets and showers were purchased and installed from Clow Darling. Where the basement was once a cold, dank area without any heating whatsoever, Clow created all new lines for heating in the basement, transforming the basement into usable living space.

At the final stage of the project (stage 4), Rob and his family could no longer live in the house and at this point all their belongings had migrated to basement storage. The opportunity came up to purchase the house next door. Everything was moved into this house and Rob decided that this was an excellent opportunity to renovate this address, 411 Catherine Street, as well. And so another project with Clow Darling began as Rob, and what he refers to as his “Go To Guys”, tackled converting another four-plex to a single family home. 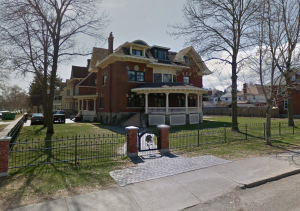